'Everything to us': Andersons experience tragedy, triumph with twins 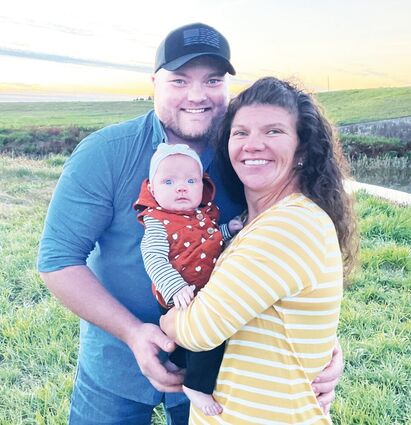 John and Nikki Anderson of New Salem with their daughter, Charlotte. Charlotte's twin brother, James, passed away in the midst of Nikki's pregnancy with the two. Nikki is from Sykeston, and is the daughter of Karen and the late James Neumiller.

(Editor's Note: This article is the fifth in a series highlighting Carrington and Foster County-native parents of multiple births.)

Like past families profiled in the Independent's recent "Twin City" series, Sykeston native Nikki (née Neumiller) Anderson, and her husband, John, have endured much to provide for an anticipated busy household.

But it was the ordeal the Andersons lived in bringing their now healthy daughter, Charlotte, from uncertainty that she would survive a premature birth at 29 weeks and the tragic death of twin brother, James, in utero, that has made their resolve for love, faith and family stronger.

"For John and I, Charlotte has meant everything to us," Nikki says. "Becoming parents was something both of us have wanted for a very long time, and sometimes, it doesn't seem real that we actually have a daughter. Our world has definitely changed bringing her into it, but all for the better."

Nikki and John met in March 2019, when she was employed as an RN at CHI St. Alexius Health Carrington. They were engaged just six months later, and were married on October 10, 2020.

The Anderson family always knew they wanted to have children, but they were unprepared for the results of Nikki's first appointment.

"I found out pretty early that we were pregnant, but started to have some complications," she explained.

Nikki says she was convinced she had a miscarriage, and was fully expecting to hear from the ultrasound technician that she had lost her baby.

"First thing they said to me after a few minutes of scanning was, 'How do you feel about twins?' My mouth dropped open and I was in disbelief, but very excited," she recalled.

She broke the news to John, saying, "I have good news and bad news. Good news is, we're still pregnant, but the bad news is it will be expensive because we're having two babies."

"He just laughed, thinking I was joking," Nikki said.

At their 20-week appointment, both babies were completely healthy, and were measured in the 95th to 99th percentile for size.

"That one is with him"

It was at 24 weeks where tragedy struck.

After a few minutes of scanning, Nikki's ultrasound tech went to her doctor to ask for a certain fetal measurement, and her doctor came back with the news all prospective parents dread.

Baby A had passed away.

"She continued to do more scanning, but could not find any indication as to why," said Nikki.

The Andersons were not planning on learning the gender of their babies beforehand, but in this case, they wanted to know what their little angel was.

"We found out he was a boy," she said sadly. "It was definitely a hard couple of weeks afterwards. The family took the news about as hard as we did."

When John and Nikki originally got pregnant, Nikki's father, James "Jim" Neumiller, was thrilled at the prospect of two new grandbabies to add to three (going on four) cousins.

Tragically, Jim passed away in February 2021, and Nikki didn't have to go very far to inspiration to figure out her little boy's name.

"We decided to name him James, and Victor as a middle name after John's grandpa," she said. "I did have some comfort in knowing how excited my dad was that we were having twins. That one is with him."

One week at a time

Pressing forward, the Andersons were more nervous about the surviving twin's prognosis, while still carrying a deceased twin.

"We still never found out what gender Baby B was, and tried to stick to as much of our original birth plan as we could. Both of us got sighs of relief with each new appointment when we could see this baby moving and hear her heartbeat."

Since she was carrying multiple babies, Nikki was at heightened risk for preterm labor, and with extra fluid and losing James, at high risk.

"It was a case where we were just trying to make it one week at a time," she recalled.

Unknown to her, she had just gone into labor.

"I honestly thought I was going into Braxton Hicks," she said of the periodic abdominal contractions that can often be confused for the labor process.

Nikki thought nothing of it at the time, reporting to work as usual.

"Then, I realized I had two voicemails from the doctor's office urging me to come in right away," she says. "Thankfully, I was able to leave work to go to my appointment, and as it turned out, I was in active labor with contractions every two minutes."

Admitted to the hospital, Nikki was given medication to try and stop the labor, and also a steroid to help the baby's lungs develop in case the medication didn't work.

The first plan of attack was unsuccessful, so the providers tried to slow contractions to 10 minutes.

"By the next morning, there was no stopping it, so they took me for a C-section right away.

Charlotte Ann Anderson emerged on May 5, 2021, weighing 3 pounds, 6.9 ounces at birth, which Nikki said is a good size for a twin at that gestational age.

However, Charlotte was whisked away to the NICU (neonatal intensive care unit), because she was unable to breathe on her own.

During that time, John and Nikki were able to spend time with their son and achieve a sense of closure.

"The nurses were great helping us get pictures of him and his footprints and handprints," she said.

Once three hours passed, the two were finally able to go to the NICU to see Charlotte.

"She was doing well at that point," Nikki said. "She was on a vent to breathe, and had IV's running. Thankfully, she was a fighter, and never had any setbacks, just slow and steady improvement."

After 65 days, she was ready to come home, now at an average birth weight of 7 pounds, 9 ounces.

As happy as the Andersons were, Nikki still had a lingering feeling of nervousness that first night.

Because of her small size and stage of development, Charlotte was unable to take in feedings, so she was placed on a tube.

It took another month-and-a-half before she was able to take bottles.

Charlotte has become a happy little girl, according to her mama, but does not like to be left alone.

"It's a bit of a surprise that she's still on the smaller side because she loves food," Nikki laughs. "Anytime she sees someone eating, she has to holler until they share with her. She loves ice cream, especially."

Nikki, John and Charlotte will welcome another bundle of joy to the world in the coming months, adding to their growing family.

She added, "Both sides of our family absolutely adore her, especially her cousins. Anytime we go somewhere, everyone just wants to see Charlotte."

The Andersons' life with eight-month-old Charlotte, and the eternal memories of their angel baby, James, has helped them realize the fragility, but preciousness, of family.

"This has made us truthfully grateful to be able to have a healthy baby girl and continue to experience life as a family," said Nikki. "We're also reminded not to take life for granted."

They now live just outside of New Salem, after moving around the New Year's holiday from the Bismarck "suburb" of Lincoln. John has been employed as a field diesel mechanic for Butler Machinery for 10 years.

Starting later this month, Nikki will fittingly be starting a new job as a NICU RN at CHI St. Alexius in Bismarck, where she can care for other babies and give back the peace of mind and comfort to mothers and fathers that she experienced that day in May.