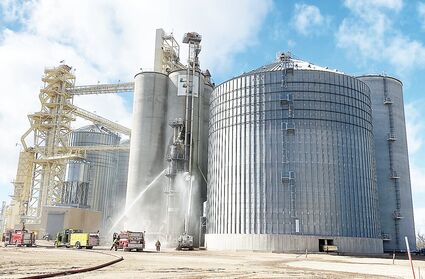 The Carrington Fire Department puts out a fire that hit a grain dryer at the Central City Grain elevator Thursday, March 17.

The Carrington Fire Department was called into action Thursday afternoon, March 17, for a fire at the Central City Grain elevator on the north side of the city.

The blaze began in a grain dryer attached to the east side of the elevator, and the fire crews were dispatched to the scene just after 3 p.m. that day.

Fire Chief Ken Wangen said of the call, "When we got on scene, there were flames nea...