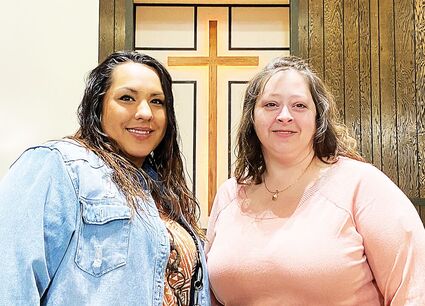 Whitney Carter and Tammy Sorensen are the co-owners of Tots and Tumbling Learning Center.

A leap of faith, as she describes it, along with her feeling that "everything happens in its own time, and for a purpose," brought Whitney Carter back to Carrington after five years away.

The 31-year-old St. John native is embarking on her newest adventure, the opening of the Tots and Tumbling Learning Center, at the former Church of the Nazarene located at 530 Joal Drive.

Tots and Tumbling is a joint venture owned by Carter and Carrington Gymnastics Club owner/director Tammy Sorensen, and both will make use of the building for their separate needs.

Carter will be operating the daycare facility side of the operation, and brings 13 years of experience in working with children in numerous settings, from Head Start to preschool director and small childcare business owner.

"I've always had a love for children," says Carter. "When I was 11, I knew that I wanted to work with children for the rest of my life."

Following her high school graduation from high school in Belcourt in 2009, she was accepted into the Elementary Education cohort at Turtle Mountain Community College. She received her associate's degrees from Rasmussen College in early childhood education and child development.

"While attending the early childhood education program, I realized that my real passion is working with children with disabilities and learning delays, particularly in their most critical years of birth through five," Carter said.

She holds 10 years of on-the-job experience in child care and preschool, and has certifications in trauma-sensitive training, observational training and courses in special education.

From the public to private sector

In 2016, she and her family moved to the Fort Berthold Reservation, where she accepted a job as a Head Start lead teacher in 2016. The following year, she became the Early Childhood Coordinator and Preschool Director for Parshall Elementary School.

However, the local daycare provider in Parshall shuttered its doors permanently in 2018, putting Carter at a vocational crossroads.

"I was left contemplating how to navigate a full-time job with three small children, and at that time, I made the decision to leave my career and pursue a new path as a small business owner," she said.

Because of COVID-19 restrictions and lack of staff, Carter was forced to close the New Town center, but upgraded her license in Parshall to a "center," which allows her staff and most of her students at the former location to transfer membership.

She still oversees the Milestones facility from her home here, visiting a few times a month, and holding regular employee training sessions.

"This would not be possible without my dedicated director and staff," says Carter.

"Home in my heart"

Although Whitney says she loves the people that she works with and the families they serve at Fort Berthold, she says, "It never felt like home in my heart, and I longed to return to Carrington."

With the help of a close friend and community leaders, Carter began the arduous process of securing housing and looking into business opportunities.

She officially moved back with the kids in January, after beginning the process of securing the Church of the Nazarene for the new Tots and Tumbling business.

The "tumbling" part of the equation came when she met Sorensen, who was looking to find a space of her own after headquartering the club in rented facilities at the old Rusty's Hardware Hank location for several years.

"I was introduced to her in February, and gained a friend and business partner," said Carter.

The two created an LLC (limited-liability corporation), made adjustments to their mortgage and grant applications, and four months later, were able to close on their loan on April 14.

"This wouldn't have been possible without the help of the Carrington Area Chamber of Commerce, Bremer Bank, and the city council," said Carter.

Tots and Tumbling was awarded funding to help pay the facility's down payment, and a provider grant to assist in start-up costs for the daycare.

A permanent home for the gymnasts

Originally, Sorensen's plans were to purchase the Church of the Nazarene building herself, but when she learned that Carter had already made an offer and was willing to rent space to other parties, she reached out to her to see what her plans would be.

Suddenly, the light bulb went off.

"After a lengthy discussion between us, we thought it would be good to partner up and own the building together," said Sorensen. "Our vision on what we wanted to do with the space matched up."

"We practice on a 24' x 60' spring floor, but when the girls go to a meet, they perform on a 40' x 40' floor," she noted. "Ceiling height for [uneven] bars is our other issue, and we have girls ready to learn how to do handstands and giants on the high bar, but the ceiling limits us right now."

Sorensen's club will utilize the church sanctuary as its gym space, and she will have additional office space to fit her needs.

"All the current equipment will be moved into this space, including the spring floor, bars, beam, vault and tumble track," she says. "We'll also have two rooms designated for offices and a team locker room with an attached bathroom. And, when the daycare is closed for the evenings and weekends, we can also utilize the kitchen and dining room as needed."

Sorensen also envisions the daycare being able to utilize the gym space during the winter months for large motor skills/movement time, physical and occupational therapy, dancing, and to be used by other athletes as needed.

The building's floor plan also allows the possibility of expansion in the future, Sorensen said.

In all, the new collaboration should be a beneficial one for children of the community, says Carter.

"The Church of the Nazarene is a big, beautiful facility, and I was excited to learn that this could benefit another growing business in our community," Carter said.

The rest of the facility will function as a new branch of Milestones. Five classrooms will be provided for an optimized learning experience.

"I believe that children adjust easier to daycare and can learn to their fullest potential in a classroom with peers their own age and skill level," said Carter.

"Based on enrollment needs, the fifth classroom will be reserved should there be more children of a specific age group enroll," she says.

Carter notes that much planning goes into the setup of each classroom to ensure that the equipment, instruction and training of their classroom provider is developmentally appropriate.

Through a childcare platform called ProCare, parents are given updates on their children throughout the day, can view lesson plans and the weekly menu, view invoices and pay bills, and communicate with staff members.

The target date for opening Tots and Tumbling is "no later than June 1," according to Carter. She looks forward to answering any questions interested parents may have, by e-mail at [email protected], or her Facebook business page.

Carter will be hosting an open house with dates to be determined, that will be open to the community, and allow parents and children to tour the facility and fill out enrollment packets.

Pre-enrollment forms, along with employee applications, can be requested now via Carter's e-mail address.