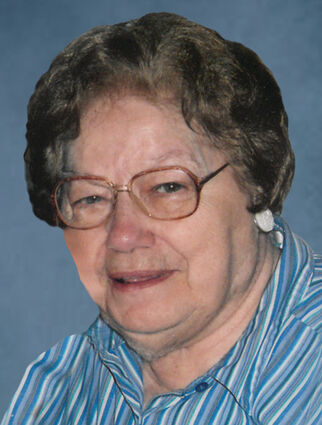 Lucille Clark, 93, of Carrington, N.D., went to be with her Lord on April 15, 2022, with her family at her side, under Hospice Care at the Lutheran Home of the Good Shepherd, New Rockford, N.D.

A funeral service was held Wednesday, April 20 at 10:30 a.m., at the Federated Church UCC/UMC, Carrington, N.D., with Rick Loewen officiating. Lois Clark was soloist and Clara Edwardson was organist. Congregational Hymns were "One Day at a Time" and "Open My Eyes." Her burial was at the Carrington Cemetery.

Honorary bearers were all of Lucille's loving family.

Lucille was born on April 30, 1928, in Foster County, the first born to Charles and Helen (Paluh) Hallwachs. She grew up in the Hawksnest Hills area attending country school and graduated from Carrington High School.

On June 29, 1946, Lucille married Theodore "Ted" Clark in Carrington. Together they started Clark Truck Line, building their business for over 50 years. After starting a family, Lucille worked at Foster County Bank as Head Teller for many years. Once the family and business grew, Lucille stayed home to help with the trucking business once again.

She is preceded in death by her husband Ted; her parents, Charles and Helen Hallwachs; a brother, Marvin Hallwachs; a sister, Betty Schock; a son-in-law, Larry Schroeder and one great-grandchild.