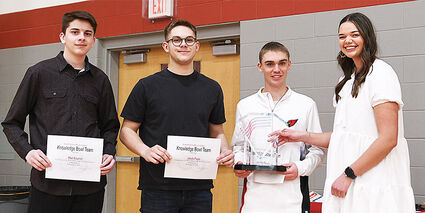 There was a full house at CHS Honors Night on Tuesday, April 26. High school students involved in a variety of academic pursuits were recognized for their dedication.

Here are some of the highlights of the annual event, noting those who received special awards while recognizing the efforts of students involved in co-curricular activities that haven't previously been highlighted in this newspaper throughout the school year.

Hunter Beumer, Brecken Lura, Jacob Rexin, Dawsyn Anderson, Jacob Page, Lucas Hendrickson, Emma Rindy and Tate Larsen earned the Presidential Award of Educational Excellence. The award is given to seniors who scored at least a 25 on their ACT and earned a 3.5 GPA or higher in coursework throughout high school.

Director Kristina Schuh honored six senior band and choir members with special awards. In band, the Senior Award went to Isabella Garr, Excellence in Music to Nicole Lee, and the Director's Award to Joe Lindberg. In choir, Emma Stans, Kaylee Barone and Logan Marlow were the winners of the Senior Award, Excellence in Music and Director's Awards, respectively.

The Science Olympiad program had a strong showing at competition this year. Patrick Boehmer and Carrie Nichols, the senior and junior advisors, reported that both teams ranked in the top five at state and were the top overall Class B teams in both the regional and state events. The junior high team finished third overall at state, while the senior high team finished fifth.

Rori Ricter was recognized as the Most Improved Speaker, and Kaley Kostelnik received the Hardest Worker and Most Valuable Speaker awards from speech advisor Kristen Hewitt.

Dietz also recognized Tate Larsen with the Carrington Area Chamber of Commerce Scholarship, which is given to a senior who has worked at a member business during high school.

There were three CHS seniors among the recipients of Dakota Central scholarships: Isabella Garr, Jacob Rexin and Tate Larsen. 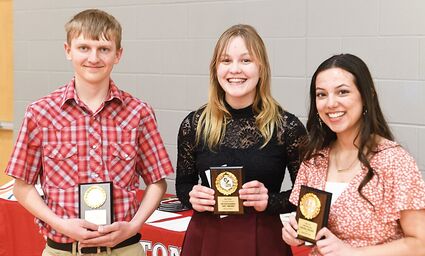 *Editor's Note: There was an error in the print edition of this story. The Dollars for Scholars program handed out $10,250 in scholarships at CHS Honors Night, as published above. The organization also received a $2,000 grant from the Carrington Community Foundation after Honors Night, for a total of $12,250. A correction will be published in the May 9, 2022 print edition as well. We apologize for the error.