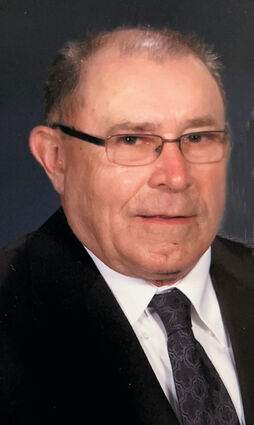 After being drafted in 1958, he served in Korea for one year and was discharged in 1960. Bob joined the National Guard in 1961 and served as a Staff Sergeant within that branch for 28 years.

Bob married Janet Miller on December 27, 1960. The couple celebrated 62 years together, living in the family home they purchased in 1964. Bob and Jan welcomed three children: Jeff, Julie, and Joan, who were an important part of their lives. Their two granddaughters were a special blessing to "Grandpa Sadie."

Bob owned Pearson Electric Motor Company; a business started by his father. He enjoyed helping his customers and was service oriented in his business. He was a generous person.

He was a member of the Amvets, Eagles, Tri-Valley Tractors, and Trinity Lutheran Church. Bob enjoyed collecting Allis Chalmers tractors, the Minnesota Twins baseball, gardening, and visiting with his friends.

He was preceded in death by his parents; brother, Gary; and nephew, Dale.

His funeral, with military honors, was celebrated at 11 a.m. on Thursday, June 23 at Trinity Lutheran Church in Valley City. Visitation with the family took place one hour before the service. A private burial was held at Memory Gardens.

The funeral service was live streamed and archived along with his obituarty and tribute page at www.lerudmathias.com.

The Lerud Mathias Funeral Home is assisting the family with arrangements.