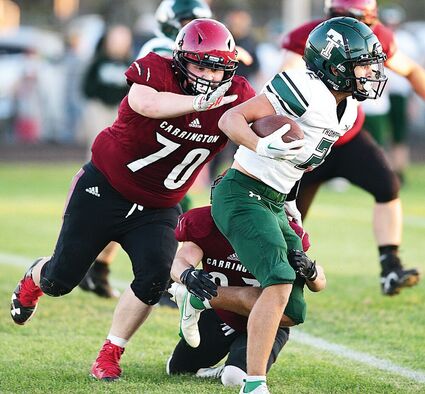 Luke Christianson (70) is in hot pursuit of Thompson ballcarrier Brody Gibson on this play, and Logan Weninger (partially obscured by Gibson) grabs a hold of his leg. Gibson rushed for 91 yards and two touchdowns.

The scheduling gods may have been particularly unkind to the Carrington Cardinal football team.

Of the four teams in Class 11B Region 2 that the Cards have faced, three of them are currently at the top of the standings, with an 11-1 combined record.

That stretch continued Friday night, September 9, as undefeated Thompson rolled into Stadium '22 and took down CHS, 36-14, behind a balanced attack...