CHS School Board: "No" to three classes 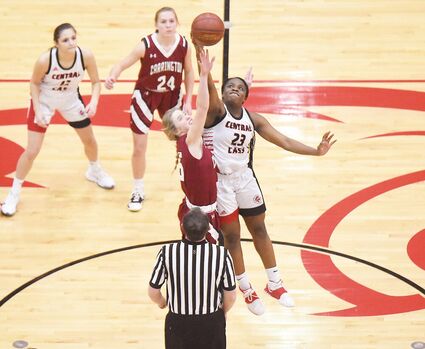 In this Independent file photo from the 2021 State Class B Girls' Basketball Tournament at the MSU Dome in Minot, Carrington's Hannah Hagel and Central Cass's Decontee Smith jump for the opening tip in the state semifinal game on March 5, 2021, won by a score of 63-51 by the Squirrels. Lexus Page (24) is visible in the background for the Cardinals. Administrators from Valley City and LaMoure high schools have advanced a proposal for a three-class system which would be implemented if statewide school districts approve it by a 60 percent majority vote, and if it passes a final vote of the North Dakota High School Activities Association (NDHSAA) board. In the hypothetical new realignment, both Carrington and Central Cass would move to the East Region of Class A, the middle class between AA (large schools) and B. CHS would be the smallest school in the new region by enrollment, barely reaching above the 180-student threshold dividing Classes A and B in the proposal.

The latest proposal to establish three classes of high school basketball competition in the state was the topic of conversation at Tuesday's meeting of the Carrington School Board.

Superintendent Janelle Helm outlined the current proposal with the board, which puts Carrington into the East Region of the new Class A.

Proposed enrollment cutoffs are as follows, using enrollment numbers from the...