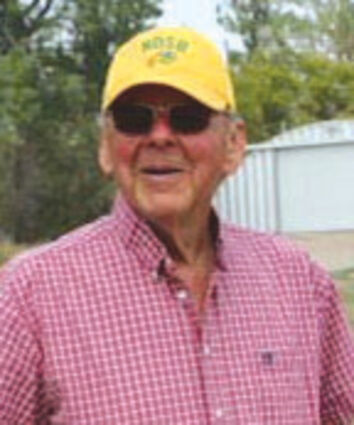 Philip Schafer, age 77, died on October 25, 2022, surrounded by family at the Lutheran Home of the Good Shepherd in New Rockford, N.D.

Heather Klocke was pianist, Kerstin Allmaras was violinist and Katie Allmaras and Debbie Omoth were vocalists.

Phil was born on January 2, 1945, to John and Elsie Schafer in New Rockford, N.D. He attended St. James Academy until the eighth grade and graduated high school from St. Thomas Military Academy in St. Paul, Minn.

He attended Wahpeton Short Course and North Dakota State University before returning to the family farm.

He was united in marriage to the love of his life, Linda Lill, on November 27, 1965. For almost 57 years, they worked side by side building a life, legacy and carrying on the fourth generation of Rhein Valley Farms.

At St. Joseph's Catholic Church, he served as a Parish Council Member and taught religion classes. Phil and Linda were the recipients of the Wells County Harvest Bowl award in 1991.

Phil spent his whole life in production agriculture and livestock. His strong faith guided him through these times. He embraced technology changes and appreciated some more than others (heated cabs for winter morning chores). His infectious smile and sense of humor was loved by all he touched. He was a role model for work ethic, determination, responsibility, and positive attitude.

Above all, he adored his wife and family. Phil spent hours playing cards and dice with his family and passing on the tradition.

In his younger years, he spent a lot of time on horseback. His love of horses was passed down through the generations. Phil and Linda could often be seen going for ranger rides to check pastures and crops.

Punctuality was important to Phil. He could often be heard saying that the bus is leaving whether you're ready or not. Phil was the entire family's biggest cheerleader and best storyteller.

Phil was a man with a big, strong heart. We witnessed that as he battled health challenges, and the last one called him home. We will forever miss the wonderful husband, father, grandpa, and great-grandpa but will cherish his wings from above.

He is preceded in death by his parents, John and Elsie Schafer, and grandparents.

The family would like to thank Dr. Geier and his staff, the Lutheran Home of the Good Shepherd, Hospice, and Evans Funeral Home for their love and care.

In lieu of flowers, donations can be sent to the Rural New Rockford Fire Department or St. Joseph's Catholic Church Cemetery.