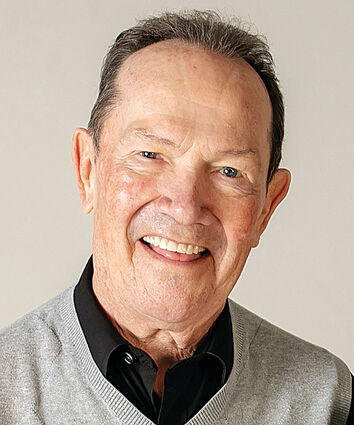 Visitation was held Friday at Hertz Funeral Home, Harvey, N.D., with the Funeral Service held at 2:00 p.m. Saturday, Nov. 26, at the Hurdsfield Community Center, in Hurdsfield, N.D. Burial was in the Pleasant Hill Cemetery, Hurdsfield.

Gene was born in Harvey, N.D., on May 6, 1942, to C. Jack and Bernice (Lacy) Wilson. The family made their home in Hurdsfield, where Gene was raised and his parents owned and operated the local grocery store for 30 years.

Growing up, Gene enjoyed working at the store alongside his parents and younger siblings, Barbara and Curtis, and getting to know many of the local residents. Gene would proudly remark that he graduated Salutatorian from Hurdsfield High School in 1960, but would often joke that it was pretty easy with only three other people in the class!

After high school, he attended Bismarck Junior College and then Jamestown College where he graduated with a Bachelor's degree in teaching. He began his teaching career in Rugby, N.D., in the fall of 1965 at Rugby High School where he taught English, Speech, and coached the Speech & Debate team. One of his proudest achievements was leading his team to the 1966 State Speech and Debate tournament where his students captured the state title.

While teaching in Rugby, Gene met his future wife, Noreen Grove, and they were united in marriage at Bethany Lutheran Church on August 20, 1966. Gene went on to teach in Crookston, Minn., Carrington, N.D., Goodrich, N.D., and, most recently, in McClusky, N.D., in the fall of 2021. Teaching his students brought him great joy and he genuinely cared for them and wanted them to succeed.

When he wasn't teaching, his love for music led him to careers as a DJ at radio stations KZZJ in Rugby, KDAK in Carrington, and also would showcase his DJ skills with private events he referred to as "record hops" in the '80s & '90s, providing music and entertainment for many weddings, anniversaries, and other events.

Gene was a natural salesman, which led to different avenues of sales including advertising, World Book/Childcraft, and insurance throughout his career. He had much success with World Book which earned him trips to Chicago and New Orleans as their top salesman.

In 1985, Gene began selling insurance when he joined Noreen at Wilson's Insurance Agency in Carrington (until her passing in June 2000). They had many clients in the surrounding areas and Gene made it a practice to send birthday cards to their clients. In the later years, he would still call those clients on their birthdays. In fact, his calendar was full of birthdays of family, friends, and clients who he would faithfully call each year and wish them happy birthday.

After moving back home to Hurdsfield, Gene cared for his mother, Bernice, until her passing in 2011. He was also active in local government, where his love for the community drew him into public service as Mayor of Hurdsfield for 18 years. During this time, Gene rekindled old friendships and made new ones. Always a good host, he welcomed his friends for cocktails and hors d'oeuvres while visiting and listening to music, especially the '50s & '60s. He also loved his annual reunions with his fellow Jamestown College buddies.

One of Gene's best and most formidable traits was his sharp wit and keen sense of humor. Those who knew him best would frequently engage in banter that would almost always end up with tears of laughter. His dear friends, Randy Rask and Doug Mertz, were the most frequent participants in his hijinks.

Gene loved his children and grandchildren dearly and treasured those moments spent together fishing, hunting, and traveling and just simply being together watching movies or listening to his favorite artist, Elvis Presley! In 2010, Gene and his kids took a trip to Memphis to visit Elvis's home, Graceland, where lifelong memories were made.