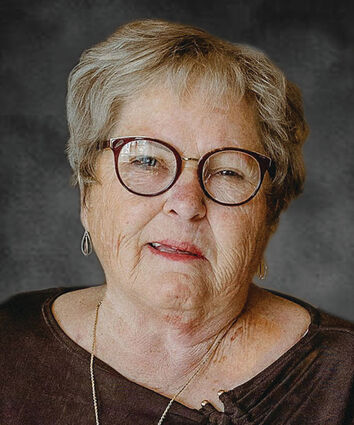 Judy Ann Volk (Longre), 74, of Kenmare/Carrington, N.D., passed away peacefully on the morning of November 18, 2022. Judy was surrounded and comforted by family members and friends at her home in Carrington.

Her Mass of Christian Burial was held December 3 at 10:30 a.m., at Sacred Heart Catholic Church, Carrington, N.D., with Father Terry Dodge officiating. Special music was by Sacred Heart Choir. David Nelson was soloist and Marlene Boyer was pianist. Her burial was at the North Dakota Veterans Cemetery, Mandan, N.D.

Honorary pallbearers were all of Judy's family and close friends.

Judy was born on March 28, 1948, at the Kenmare Deaconess Hospital in Kenmare, N.D. She was the youngest of seven children and fourth daughter of Virginia Mae Brien (mother).

In her early life, Judy worked as a CNA for several years before taking a position with the Bureau of Indian Affairs. Judy was very proud of her culture as a member of the Turtle Mountain Chippawa Tribe following in her mother's heritage. She was an accomplished quilter (volunteering with the local quilting club), gardener, [iPad/Computer] casino game millionaire, and bingo queen.

She was passionate about service to others, supporting the visions/dreams of all those around her (especially her children and grandchildren), and striking up conversation with everyone at Prairie Inn who offered banana cream pie.

She is preceded in death by her grandparents, Sarah and Alfred Brien and Fannie and John Longre Sr. Parents, Virginia [Brien] and John Longre Jr .; sister, Marlene White and brother, Tom Longre; along with several uncles, aunts, and cousins.

Online condolences may be sent at http://www.EvansFuneralHomeND.com