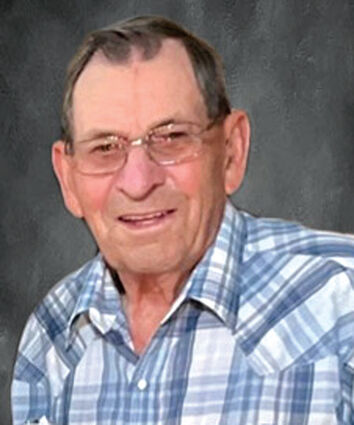 Leonard Ray Fike, 81, passed away peacefully at his home, surrounded by loved ones on November 16, 2022. He is now in his heavenly home with his Lord and Savior, Jesus Christ.

His Funeral Service was held Monday, November 21 at 11:00 a.m. at Bowdon Lutheran Church, Bowdon, N.D., with Rev. Warren Rhodes officiating. Linda Eide was organist and special music was by Brenna Anderson. Burial was at the Chaseley Cemetery.

Honorary pallbearers were all of Leonard's family and close friends.

Leonard was born on November 6, 1941, in Chaseley, N.D., to Ray and Selma (Johnson) Fike. He was the second of their three children.

He attended school in Chaseley and graduated from the eighth grade. Early on he worked for area farmers and ranchers, as well as on the family farm.

He also enjoyed driving a semi at an especially young age for Krause Truck Lines. He lived in Harvey for a short time and worked for his brother, Larry, until he moved, with his wife Colleen, back to Chaseley to live and farm with his dad.

Leonard married the love of his life, Colleen Hart, on October 11, 1969, in Chaseley. They lived there until 1979 when they built a home one mile south of town and lived there together for the remainder of their lives. They had a happy life there raising their children Roxane and Troy while making many wonderful memories.

In May of 1990, Colleen was diagnosed with brain cancer. The love Leonard demonstrated was truly beautiful during those difficult years. He remained by her side throughout the battles and lovingly cared for her up until her death on May 14, 1997. He was once asked if he would marry again, and he answered, "No, Colleen was the only girl for me." They have now reunited in heaven and what a joyous celebration it must be!

Leonard was a hard worker. He spent time farming, raising sheep, driving the school bus, and even logging several million miles in his semi some of which were alongside his son and partner of L & T Fike Trucking, Troy. He had a knack for fixing farm equipment and took pride in it. Leonard loved life and lived it to the fullest.

He was also an excellent marksman and could hip-shoot like no other. He had extensive knowledge of classic cars and guns amassing an impressive collection of classic toy cars and tractors similar to those he once owned. He loved watching westerns, doing yard work, shooting, and was a legendary "snake-slayer"!

Leonard enjoyed entertaining his family with stories from his younger days, often leaving them in awe that he lived to talk about them. He certainly lived an eventful life and some may say he had nine lives.

Some other special memories are of his fishing trips to Canada with family and friends over the years, and later, he enjoyed many winter trips to Yuma, Arizona with his siblings and their spouses. He enjoyed taking their 4-wheelers out into the desert and playing dominoes.

Grandpa Leonard, also known as, Papa Lenny, adored his five grandchildren and loved spending time with them, attending their activities, and just getting to visit with them. He always had Drumsticks and Oreos in the house for them when they came for a visit. He truly loved his whole family, and they loved him so very much.

Leonard will be remembered for his kind, gentle spirit, thoughtfulness, patience, affection, and unconditional love. His family will miss his long phone conversations, hugs, and "I love you" so very much. He was dearly loved and will be deeply missed by his family and friends. To know Leonard was to love him.

Leonard is proceeded in death by his wife, Colleen, his parents, an infant brother, Arthur James, sister-in-law, Myrna Fike, and his trusty, semi-driving partner, Dusty (his sheltie).