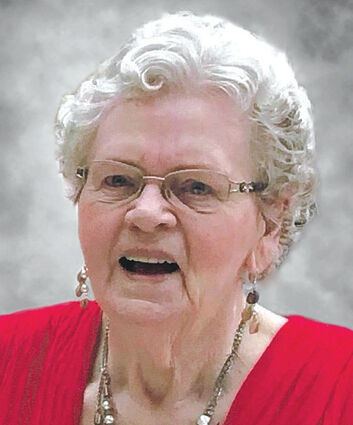 Viola Janet Gisi passed away on December 2, 2022, at the Lutheran Home of the Good Shepherd, to join Johnny in their forever heavenly home.

Viola Janet (Gjestvang) Gisi was born March 28, 1932, to Ivar and Nora Helen (Rude) Gjestvang. She was the third of seven siblings and was born in McHenry, N.D., where there was a house used as a hospital.

The Gjestvang family lived at that time on a farm near Hamar, N.D., then moved to a farm south of Warwick. Finally, the family moved to a farm nine miles south of Warwick and across the road from the Lake Washington rural school where she completed the seventh and eighth grades in one year and then ninth and tenth grades. She learned to play piano and sang harmony with her sisters and others.

Vi attended New Rockford High School her last two years of high school, 20 miles from the family farm, living in a room rented in New Rockford by her parents. She graduated NRHS at the age of 17. She then attended Mayville College where she obtained a teaching certificate. She first taught school near Hamar in a school that was destroyed by a fire that started during the school day, from which she had to remove the children. She finished that year teaching in a school held in a Hamar farmer's home.

Vi went to movies and attended dances while in high school in New Rockford, where she developed a crush on a young man, Johnny Gisi, who played violin in a dance band in the area. He would offer to drive her home after a dance. One of their first dates was going with other young people to the Fessenden Fair.

She married Johnny, son of John and Fanny (Glaser) Gisi on April 2, 1951, at the age of 19; and they lived on the Gisi family farm 15 miles east of New Rockford. Vi taught school at the Tiffany #3 school which was located near their farm, sometimes riding horse to get to the school. Helpful students would help her mount the horse when the school day was over, because the horse would not stand still for her to get on to ride home.

She stopped teaching to help with the farming and raise her family. She and Johnny played for area dances with family members and friends. She served on the school board, and taught piano at home to area children, including her own.

She was a 4-H leader and helped teach many girls to sew and cook. She was a real partner in farming to Johnny until they retired, and she worked hard, gradually letting her daughters and sons take her place running farm equipment and feeding animals with Johnny.

She worked for a short time at the Lutheran Home kitchen, and donated her time to do women's hair there as well.

The family asks that any memorials be given in her name to the Lutheran Home of the Good Shepherd, New Rockford, N.D.