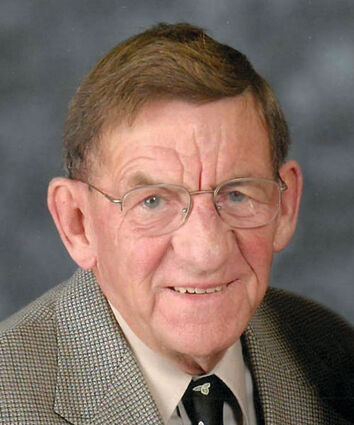 Wick's visitation will be Monday, January 9 from 9:30 a.m. - 10:30 a.m., followed by a funeral service at 10:30 a.m., with Pastor Rick Loewen officiating, all at Evans Funeral Home, Carrington. His burial will take place in the Spring of 2023 at the Carrington Cemetery.

Honorary pallbearers will be all of Wick's great-grandchildren, Bud Schock and Jerry Klocke.

Wilfred "Wick" Larson was born in Foster County on September 19, 1931. He attended and graduated from Juanita High School in 1949.

Wick served in the Korean War from 1950-1952. After returning, he married his sweetheart Yvonne Beach in 1953. They lived in Fargo for a short time until moving to their lifetime home of Carrington.

Wick always had a love of working in the gas station business. First of which was Wheeler Standard and then he co-owned Jim & Wicks and then to Mobil. He finally retired from working while at HE Everson.

Wick's best time was visiting with people and he could strike up a conversation with anyone. He always enjoyed and treasured the time he could spend with his grandchildren and great-grandchildren.

Greatest times for Wick were watching wrestling, especially his grandsons, and going fishing. His bride Yvonne passed away in July 2022 and he joined her for a New Year's celebration in 2023.

Wick is preceded in death by his wife, Yvonne; daughter, Cindy; son, Steve; his parents; sister, Elaine Sampson; and many in-laws.

Online condolences may be sent at http://www.EvansFuneralHomeND.com