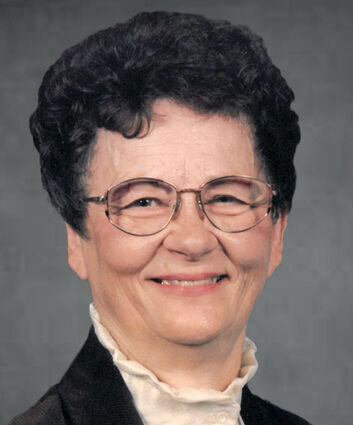 Cleone (Klimek) Finch of Carrington, N.D., passed away on January 4, 2023, at Golden Acres Manor in Carrington.

Cleone's visitation was Tuesday, January 10 from 9:30 - 10:30 a.m., followed by a funeral service at 10:30 a.m., all at Evans Funeral Home with Father Terry Dodge officiating. Music was "Go Rest High On That Mountain" by Carrie Underwood, "Dancing in the Sky" by Dani & Lizzy and "In the Garden" by Alan Jackson. Her burial will take place at the Bagan Family Cemetery, Medina, N.D., in the Spring of 2023.

She was born in Jamestown, N.D., on September 17, 1933, to Agnes and Louis Klimek. She grew up in Jamestown graduating from St. James Academy in 1951.

Cleone was united in marriage to Elmer Finch in Jamestown, N.D., on July 11, 1953. They lived in Jamestown and later Daly City, California. Cleone was busy being a stay at home mom in her early years.

In 1968, Cleone and Elmer returned to Edmunds, N.D., and in 1978 they moved to Glenfield, N.D .; where they owned and operated Finches Bar for 15 years. They continued the bar business operating Finches Five Spot in Carrington for over 25 years.

Cleone worked at Carrington Rose Garden and Alco in the greenhouses in the springtime. She also worked at Holy Family Villa as a CNA and later in housekeeping. She continued in housekeeping at Golden Acres Manor.

In 2011, Cleone and Elmer moved to Carrington and that same year Cleone retired. Cleone entered Golden Acres Manor in August 2017.

Cleone was very active in flower gardening and cooking. She was well known for her famous fried chicken and mashed potatoes and gravy.

She was preceded in death by her parents; and grandson, Tim Hecker.