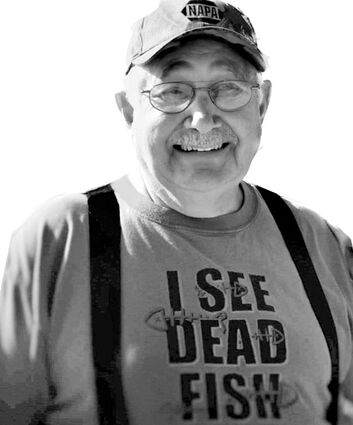 Frank was the eighth child of 13, born to Leslie and Lillian (Friezen) Davis and grew up on the Davis family farm in Nordmore township, northeast of Carrington.

In Frank's early years he was driving a tractor by age 7 and spent many days helping his dad and siblings on the farm. He was born and died a farmer who deeply loved and respected the land.

As a young man Frank enjoyed working at Mobil Gas Station and worked for several area farmers while also farming with his dad. He learned to lay brick while helping build Stub and Marie Gussiaas's family home and helped build Wallace and Emilee Miller's first home as well.

He wanted to be a bachelor like his Uncle Frank until he met and fell in love with Kathleen (Beaton). They married on June 8, 1974. Together they had three daughters and farmed a mile-and-a-half from where Frank grew up. He was the dad who took precious time off from the field to attend parent teacher conferences and concerts, and every night as he turned out their lights, he told his young daughters that he loved them.

As a young family they loved to can and freeze produce for winter, make deer sausage, chop and haul wood together to heat the house with a wood burning stove, and so much more. He was patient, kind, loved unconditionally, and had the best sense of humor.

Frank was a caretaker of his family and steward of the land. He loved the smell of freshly turned dirt when fields were worked in the spring and long slow drives to town. He had farmer hands – gentle, yet able to fix anything, worn and scarred from years of working hard and playing in the dirt.

When he retired from farming, he drove forklift at Dakota Growers where he made good friends and planted trees for Foster County Soil Conservation District. Together Frank and Kathleen worked hard and loved farm life until they moved to Bismarck in 2016 to be closer to their daughters and grandchildren. In his retirement years he continued to care for the land, growing the most abundant gardens and canning the fruits of his labor.

Frank was a Mopar guy and still owns the first car he ever bought, a 1971 340 Duster. He paid $3500 cash for it and ordered it at Carrington Motor Company, where they tried talking him out of it and told him he wouldn't like it. In his 20s when he was farming and didn't yet own a pickup, he drove to the sales ring in Jamestown and brought a calf home in the back seat. Kathleen, their daughters, and grandkids, all loved a ride in the Duster. Besides the wife and kids, it was his prized possession, and he turned down many offers to buy it over the years. (It's still not for sale.)

Frank was not only a husband, dad and grandpa, he was also a brick layer, a plumber, an electrician, a wood worker, a mechanic, a furnace repair man, a gardener, a hunter, a poet, and a great cook. He loved to grill and try new recipes. He made the best chicken noodle soup. He loved to tinker and was always up for a challenge and working on a solution to build or fix something. For many years he had a bumper sticker that said, "Don't worry, I welded it".

Frank made fast friends everywhere he went – he always had a smile and people gravitated to him. He was a man of his word. He loved his morning coffee crew at the Pony Express in Bismarck and was good about keeping in touch with close friends from Carrington. To those who loved him the most, it felt like he was the center of their world. When he arrived, the festivities, the stories and laughter could start – the room felt complete.

He was preceded in death by his parents; brothers Don and Randy; and sisters Janice, Susie and Kathy.

No services are planned at this time. In lieu of flowers, the family requests you do as Frank taught them – check the oil in your car, change your furnace filter, hug your loved ones, and tell them that you love them.