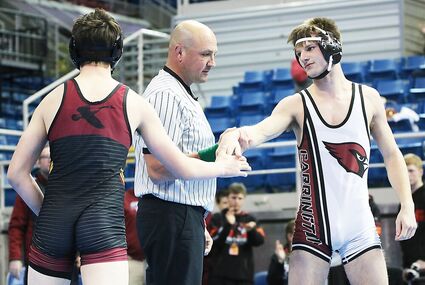 Brecken Lura (right) finishes his post-match handshake with Kenmare/Bowbells/Burke Central's Landan Spear in Lura's final action as a CHS wrestler in the consolation championship of the State Class B Dual Wrestling Tournament. Lura was a six-year placer for the Cards in the individual tournament, including championships in 2021 and 2022.

Carrington senior Brecken Lura won his second consecutive state title as one of the highlights of a 240-win career at the school Friday night, February 18, at the Fargodome, during the North Dakota State Wrestling Tournament.

He also earned the right to claim a distinction that only 11 other wrestlers statewide have achieved.

Brecken, the son of Travis and Mindy Lura of Carrington, became the f...