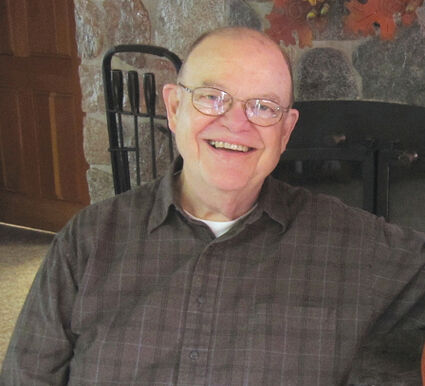 Charles was born to Nathan and Cecilia Peterson Feb 7, 1935, in Princeton, Minn. He had many colorful jobs in his youth from grocery getter for the elderly to cab driver in downtown Minneapolis.

Although he was large in stature, Charles was a gentle, kind, nature-loving outdoorsman. He enjoyed hunting, fishing, and feeding the deer near his home well into his 80s.

He was an active member of the National Guard and was proud of his military service.

Charles graduated from Northwestern College of Chiropractic in 1962 and ventured west with his family to find a quiet town in N.D. in need of a chiropractor.

He practiced in Carrington for 34 years, where he and Shirley raised three children. Charles was an avid cheerleader, following his children's careers in music, track and wrestling; so avid that he started the high school cross-country program in Carrington and became the inaugural head coach. He was most happy outdoors whether it was gardening, hunting or bass fishing.

He retired in 1996. Charles and Shirley moved to Park Rapids, Minn., in 2005 and enjoyed many years in the lakes country. They moved to Menahga in 2020 where he and Shirley lived his final chapter together.

He is preceded in death by his parents, an only sister, Mary Ann and an infant daughter, Shirley Ann.

Memorial services were held Wednesday, March 16 at 2:00 at Woodside Manor, Menahga, Minn, with visitation one hour prior to the service.

Condolences and memories may be shared with Shirley at Greenwood Connections, 427 Main Street NE, #357, Menahga, MN 56464.

In lieu of flowers, donations may be sent to your local Pheasants Forever chapter in Charles's memory.