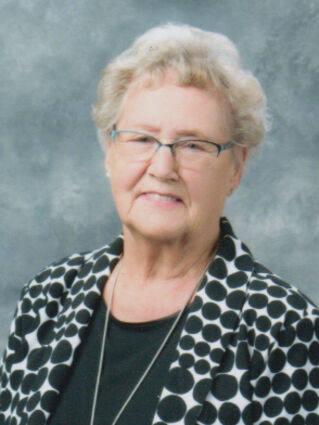 Funeral services were at 2:00 p.m., Thursday, March 17 at Trinity Lutheran Church, Carrington, N.D. Rev. Ray Hagan will officiate and burial will be in Pleasant Hill Cemetery, Hurdsfield, North Dakota. (in the spring).

Mabel Hoff, daughter of Anton and Inga (Knutson) Hoff, was born December 12, 1927, south of Bowdon, N.D., on the Hoff family farm. She attended a nearby country school through the eighth grade and then lived during the school year with her older sister, Ella, in a boarding house in Bowdon. Mabel attended Bowdon High School where she graduated in 1945.

Mabel was at home, on the family farm, and one day a young sailor just returning from World War II came by selling household products. Several months later, Mabel told her mother that she wanted to marry Emanuel. Her mom, Inga said, "You have to learn to make bread before you can get married!" Mabel said, "Well, I guess today is the day I learn to make bread."

On August 1, 1948, Mabel was united in marriage to Emanuel Dockter of Hurdsfield, N.D. They made their home on a farm west of Hurdsfield until a fire destroyed their home in 1994. They then moved just north of Hurdsfield and they lived there until Emanuel's death on December 3, 2001. Mabel continued to live there until she moved to Carrington the fall of 2015.

Mabel had many interests and hobbies but her family and God always came first. As a busy mother of seven children; she learned to multi-task. As her sister-in-law Jeanie once said, "Mabel would have a baby on one hip, a book in that hand while she was stirring something on the stove."

Mabel loved the outdoors; going on long walks, gardening and mowing the yard. She took care of her yard and planted a huge vegetable garden every year until she was 87 and moved to Carrington. She then only planted tomatoes and some flowers beside her apartment building!

Mabel and Emanuel loved to dance; you could often find them dancing at the Harvey Eagles Club. Mabel also loved playing pinochle, hand and foot, and Rummikub. After Emanuel's death she enjoyed many winter evenings playing cards with her brother Harry's family.

Mabel chose Carrington as her last home for two reasons-friends from Hurdsfield lived there and Carrington had an active senior center! She enjoyed many afternoons at the center and there she met Wes Kahl. Mabel and Wes became best friends during the COVID months; together they explored many of the sites of Foster, Wells, Eddy, and Griggs counties. When the weather wasn't conducive for driving, they ate lunch together, played a few games of Rummikub, and enjoyed each other's company.