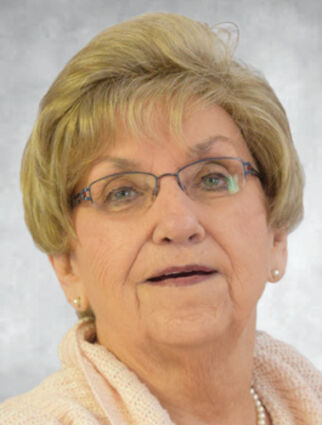 Verna Karan Goff, 83, peacefully passed away at home with her daughters at her side, in Pingree, N.D., after a long battle with COPD.

A visitation was held on Thursday, March 31 at 6:00 p.m., followed by a funeral service at 7:00 p.m., all at Federated Church UUC/UMC, Carrington, with Rev. Rick Loewen officiating. Special Music was "Supermarket Flowers" by Amber Leigh Irish and "I Believe" by George Strait. Her burial will be at a later date in Beatrice, Neb.

Verna was born on August 14, 1938, in Iowa to Cyrus Leslie Thompson and Ollie Eunice Stuart Thompson. Verna was the 11th child of 13.

Verna worked as a waitress or restaurant manager most of her life. She married Don Probasco in 1956 and together they were blessed with two daughters.

Verna later married James Goff in 1973 in Fort Dodge, Iowa. Together they made many places home including Iowa, North Dakota, Utah, Colorado, California, and finally Nebraska. Verna loved the trips Jim and her experienced; parasailing in Hawaii, bull fights in Spain and winding roads in Switzerland.

In 2016, she decided it was time to move in with her daughter, Donna in N.D .; where she quickly found her chance to cook and help out with a busy life style, that got even busier with great-grandchildren. Many afternoons you could find Ann Geske and Verna playing three handed pinochle.

The family would like to thank CHI Health at Home for assisting in her final months.