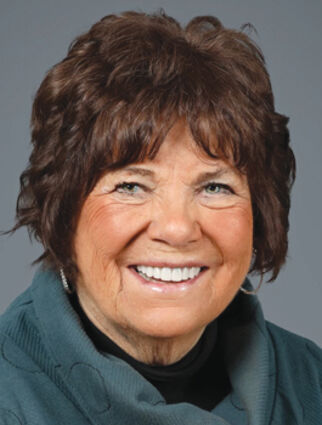 Carol Ann Leevers, 76 of Devils Lake, N.D., passed away on Tuesday, April 5, 2022, at Sanford on Broadway Medical Center in Fargo.

Mass of Christian Burial was held at St. Joseph Parish Center, Devils Lake on Saturday, April 9, 2022. The service may be viewed on facebook.com/stjosephdvl.

Carol Ann Keller was born on February 16, 1946, in Los Angeles, California, the daughter of Ione Cecelia (Larson) and Sylvester William "Bill' Keller. Her father built the sets for Hollywood movies and her mother worked at an airplane manufacturing plant.

When Carol was three years old the family moved to York, N.D., where Carol attended school through the fourth grade. The family then moved to Devils Lake and Carol graduated from Devils Lake Central High School with the class of 1964. She continued her education at Lake Region Junior College, graduating in 1966 and received a double degree in Special and Elementary Education at Moorhead State College in 1968.

Carol was united in marriage to her beloved Robert J. Leevers on August 10, 1968, at St. Joseph Catholic Church. They made their home in Wisconsin while Bob finished his education and Carol was employed for five years with the Sun Prairie School System in Sun Prairie, Wis.. She also taught for two years in Racine, Wis., and one year at Pipestone, Minn.

Their love for North Dakota and the Lake Region area brought them back to Devils Lake in 1976 and they would live, work and raise their family here through the years. Carol pursued her teaching career in the Devils Lake School System from 1976 through the spring of 1982.

Carol loved her community and gave her time and talent to so many organizations such as the Skating Club, Lake Region State College Foundation, the Key Event and 30 years promoting and advancing the Fort Totten Little Theater. She developed so many lifelong friendships with the participants of the Shakespeare Club, Bas Bleu Book Club, Most Fun Bridge Club, Thursdays at the Elks and XI-TAU Sorority.

Through the eighties, the family lived on the lake and enjoyed spending lots of hours with friends and family; sailing, fishing, boating and great times of fun and laughter around the campfires and on the patios. They later enjoyed summers at Woodlake and winters in Hawaii. They traveled extensively after retirement.

Carol cherished the friendships of so many, but the true loves of her life were Bob, her dear children and her precious grandchildren. She treasured every moment with them, following them in all their activities and events. They brought her so much joy.

Those who preceded her in death were her parents, Ione and Bill; in-laws, Norman and Marjorie Leevers; and brothers-in-law and sister-in-law John "Jack" Leevers, Thomas W. and Lois Leevers.

As the curtain closes on this earthly life of Carol's, her Sound of Music concludes with "Here are a few of my favorite things;" Bob, family, bridge, MFBC, Thursday at the Elks, Shakespeare and Bas Bleu, fun, parties, costumes, hats, balloons, glitz, holidays, hockey, musicals, plays, Woodlake and especially grandchildren Stella Bella, Liam, Thomas, Patrick, James and Andrew. Rest in the peace of God's loving arms.

Memorials may be directed to St. Joseph School Projects or Fort Totten Little Theater in memory of Carol.