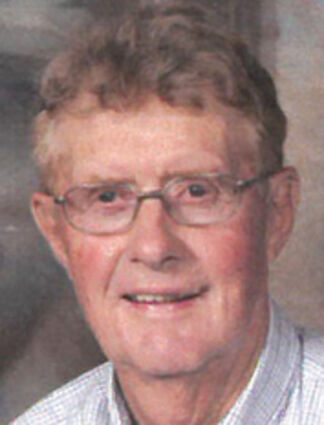 A funeral service was held Thursday, April 21 at 11:00 a.m., at Trinity Lutheran Church, Carrington, N.D., with Rev. Ray Hagan officiating. Clara Edwardson was organist and Jessica Ostrom was soloist ("I Can Only Imagine" and "Blessed Assurance.") Congregational hymns were "Amazing Grace" and "On Eagle's Wings." His burial was at the James River Cemetery, rural Grace City, N.D.

Einar Ellingson was born on January 17, 1931, to Gunder and Inger (Fundingsland) Ellingson in Carrington, N.D. He went to country school through eighth grade. When he started first grade he spoke only Norwegian. As teenagers he and his brothers were active in the farming operation on the farm.

At age 21 he was drafted into the U.S. Army and fought in the Korean War. He was honorably discharged in 1953.

A few years after his military service, he worked outside the farm at different jobs. He went back home and took over farming with his brother Arvid for about 60 years in the Haven Township. In 1976, he and his brother Arvid won the annual Soil Conservation Award for Foster County.

On June 13, 1986, he married Patricia Ferguson. She passed away on January 26, 2009. Einar took many trips to Norway and Canada, visiting family and cousins. He also took a trip to the Holy Land with Pastor Berntson and cousin Clifford Ellingson. Patricia and Einar also went on their honeymoon to Norway.

Einar was baptized and confirmed in James River Church, later a member of Glenfield Church. The last 37 years he has been a member of the Trinity Lutheran Church in Carrington, N.D.

Einar is preceded in death by his wife, Patricia; two brothers, Gerhard and Dennis; and a sister-in-law, Lillian Ellingson.