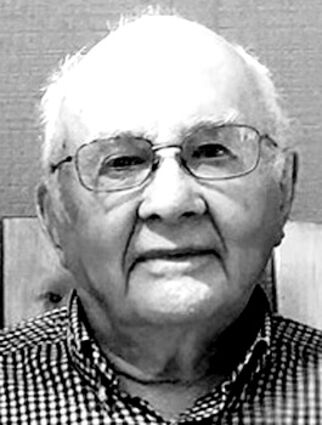 William "Bill" Starke passed away May 19, 2022 at the Lutheran Home of the Good Shepherd, New Rockford N.D. Joyce, his wife, their two children Debbie and Clint and several of his grandchildren were with him during his last hours.

William Horton Starke was born August 21, 1927, to Horton and Alpha Starke. They lived on the Klocke farmstead until 1933 when the family, now including Bill's sister Carol, moved to the current Starke farmstead in Superior Township.

Bill attended grade school at the Superior Township country school. He and Carol would travel to school in a horse and buggy driven by Horton. In the winter months, Bill and Carol would stay warm wrapped in heavy blankets, resting their feet on heated rocks.

Bill continued his education at the New Rockford High School, graduating in 1945. At the time of his death, Bill was one of two surviving members of the class of '45, the last being Gerta Bachman, also a resident of L.H.G.S. Bill continued his education for three months at N.D. State Agriculture School in Fargo. When his father Horton was severely injured in an accident, Bill returned to New Rockford and the family farm.

In 1947, a young lady named Joyce Neuharth moved with her family from Portland, N.D. Upon her arrival in the New Rockford area, Joyce enrolled in the high school for her junior year. It was at a school dance that Joyce caught the eye of young Bill and the rest is history. Bill and Joyce were wed September 3, 1950. At the time of his passing, Bill and Joyce had been married for 71 years, 8 months and 16 days.

Bill and Joyce made their home on the family farm in the house that Bill and Horton built, and over the years, Bill added on to it several times. It was from this base that Bill started a life of farming and public service.

Among his many public positions he held are Community Credit Union Board; Eddy County Soil Conservation Board and State Soil Conservation President; Township Supervisor; long time member and volunteer First Congregational Church; member of the New Rockford Lions Club (Melvin Jones award winner, 2004) member New Rockford Eagles 2923 and most notably a member of the N.D. House of Representatives, District 12, 1984-1992. In the House, Bill worked with governors and other members of the House and Senate passing legislation on behalf of N.D. citizens.

Bill also enjoyed upland game bird and duck hunting, deer hunting and the occasional Canadian fishing trip. Bill and his best dog Pepper made quite a team during their many and memorable South Dakota pheasant hunting trips with Bill's hunting friends. Bill also enjoyed the fall whitetail season, being well remembered for the time he dropped a buck in the middle of the road, loaded it in his pickup and hauled it home.

From an early age, Bill developed a strong interest in woodworking and over the years added to his skillset and tool collection. In his retirement, this passion only grew. His beautiful creations have graced the homes of family, friends and buildings throughout the area. He was most noted for his nativity scenes, known as 'creches, and his couch tables. Countless numbers of both reside in homes across the country.

He was preceded in death by his parents and daughter-in-law Brenda J. Starke.