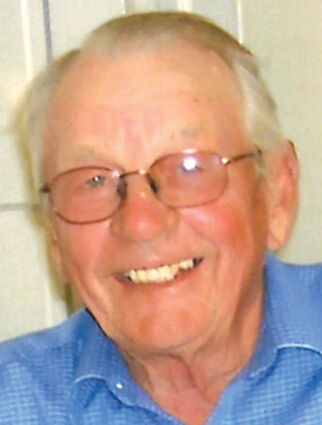 Funeral service were held at 2:00 p.m., Saturday, July 16 at Vang Lutheran Church in Manfred with Pastor Shirley Teske officiating. Visitation was from 3:00 to 5:30 p.m., with a 5:30 p.m. Family Service at the Nelson Funeral Home in Fessenden, N.D. Burial was at Vang Lutheran Cemetery.

Peter was born July 11, 1926, to Perry A. and Lilly (Rodne) Anderson in Manfred. He grew up on a farm 1½ miles west of Manfred and attended school there until the eighth grade. Peter graduated from Fessenden High School with the class of 1944.

He enlisted in the United States Army Air Corp. after high school and served at Roswell, New Mexico, Keesler Field in Mississippi and in Amarillo, Texas as an airplane mechanic working on B-29's and B-25's. Peter was also one of the flight mechanics to work on the Enola Gay.

Pete returned to the farm and helped his parents with the farming. Pete purchased the farm and was also a rural mail carrier.

Peter married Rose Alley on June 15, 1958, at Glenfield, N.D. Pete was a member of Vang Lutheran Church where he was a church officer and Sunday school teacher. He was also treasurer in Manfred, served on the township board for 50 years, and was a member of the Manfred and Fessenden school boards, Toastmasters, Sons of Norway Fagerlund Lodge, the Wells County Farm Bureau, weather modification, the Vang Cemetery board.

He was a gardener and was involved in the farmer's market. Peter and Rose received the Outstanding Agriculturist Award from NDSU president, L.D. Loftsgard.

Pete raised and sold buttercup squash and named it ABC Squash Anderson Buttercup. He always kept seeds from squash and would dry them and be ready to plant. Steve Farrington, former editor of the Harvey Herald, named Pete the "Squash King" of Wells County. Pete was also named N.D. Jaycee parent of the year in May 1994.

He was preceded in death by his parents, Perry and Lilly Anderson; brother, Donald; granddaughter, Julie Anderson; grandson, Blake William Anderson; his bowling buddies and many relative and friends.

Arrangements are with the Nelson Funeral Home of Fessenden, N.D. Online condolences may be left at www.nelsonfuneralhomesnd.com.