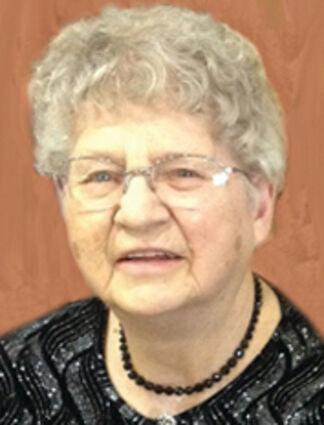 She was born on November 2, 1928, in Minneapolis, Minn., to Albert and Martha (Birkness) Bakken. She grew up in rural Maple Bay, Minn., and attended the country school where she completed eighth grade.

On July 7, 1962, she was united in marriage to Lawrence Stangeland. The couple resided in rural Glenfield, N.D. This union was blessed with four children.

Theone worked as a homemaker, farm wife and mother. She was always busy cooking, baking, canning, taking care of the garden, and helping with farm work. She was an expert at making lefse, and loved cooking food and feeding people. She was the hardest working person we have ever known!

She also enjoyed poetry, and wrote a number of poems, some of which were published in local publications. She was very actively involved with the church women's group, as well as the Gideons with Lawrence, and the local Right to Life chapter.

She enjoyed traveling in her later years, and was able to visit Hawaii, and experience a Caribbean cruise, along with some destinations closer to home.

She had a quick wit and loved to tell stories and share laughter. She and Lawrence would often sing together at church and in community choirs, and at home where she and the girls would sing around the piano with Lawrence.

After retiring from farming the couple moved to Binford, and enjoyed many years there, with many visits from their children and grandchildren. In their later years, they made the Assisted Living Center in McVille their home.

Theone was preceded in death by her parents, Albert and Martha Bakken; her husband, Lawrence; her siblings, Myrtle Broden, Adeline Johnson and Allan Bakken and son Nathan.

"Blessed be her memory."

Funeral services were held Friday, August 19, 2022, at 11 a.m. in the Bethany Free Church, Binford, N.D. Visitation was held one hour prior to service. Interment was held at James River Cemetery, Glenfield, N.D.