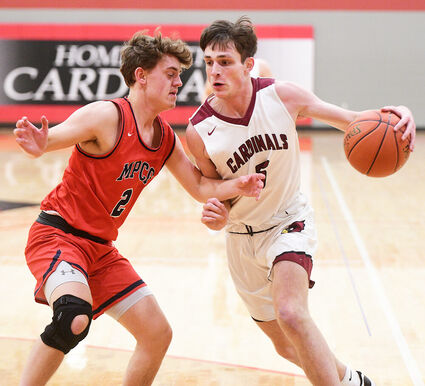 Jack Erickson takes the dribble to the basket for an eventual two points against MPCG's Bryce Juliuson. Erickson was the Cards' co-leader in points with 16.

The length and height of the May-Port-CG Patriots caused no end of problems early for the Carrington Cardinal boys' basketball team Tuesday night, January 17.

Even down 20 points in the third quarter, the level of fight in the Cards never dwindled, and they threatened to single digits on several occasions before ultimately taking a 65-53 loss to the Pats in the East Gym.

The shooting stroke of...