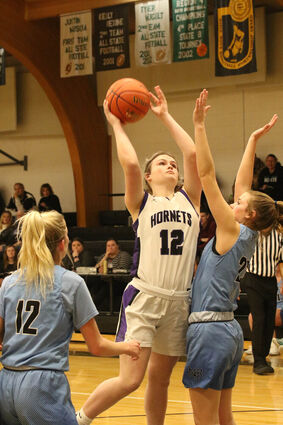 Rachel Neumiller of HWC takes a shot inside against NR-S' Ava Peterson.

Harvey-Wells County held off a furious New Rockford-Sheyenne comeback attempt to claim their first District 7 win off the season.

Earlier in the week, the Hornet girls played a solid first quarter, but Nelson County took control after that point to claim the victory.

The Hornet girls have had games against Towner-Granville-Upham and Warwick postponed because of weather so far this year. The T...