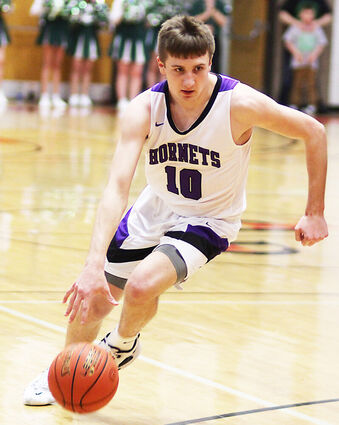 Keaton Keller dribbles into the key against St. John.

Whether it was the tough defense played by both teams or some untimely turnovers by each, the HWC Hornets escaped the grip, scoring 18 in the final quarter to defeat St. John, 45-37, in one of four opening round games at the Region 4 Boys Basketball Tournament held at the Devils Lake Sports Center on Monday, March 7.

In a game that featured eight lead changes and four ties, the first quarter w...