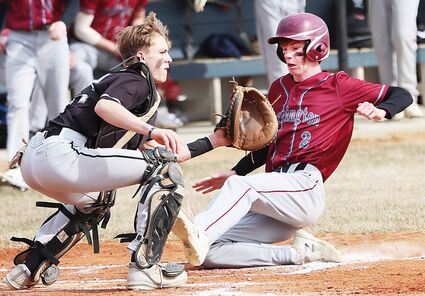 Carrington baserunner Josh Bickett slides into home plate ahead of the SNR relay throw coming towards Black Sox catcher Lucas Yri during their game last Monday, April 11, in New Rockford. The Cardinals rode another dominant starting performance, this one from Lucas Hendrickson, and two hits each by Noah Paulson and Ethan Roller in an 8-4 victory for their second win in as many games.

On Monday, April 11, both the SNR Black Sox and Carrington Cardinals entered the baseball diamond with recent wins under their belt, but only the Cardinals would leave with another.

For the first time this season, SNR's Koby Duda took the mound to start Monday's game, and struggled in his two innings of work.

His outing began with a walk followed by two consecutive wild pitches, sending the Ca...