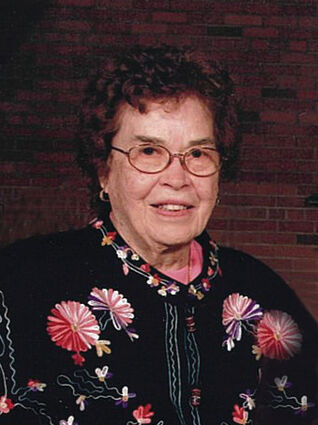 A funeral service was held Wednesday, June 1, at 2:00 p.m., at First Lutheran Church, New Rockford, with Pastor Mindy Meier officiating. Joann Leichtman was organist and Paula Loewen was soloist. Congregational hymns were "Old Rugged Cross" and "On Eagle's Wings." Solos were "One Day At A Time," "Church In The Wildwood," "A Carpenter, " and "A Mother and A King." Her burial was at the Nystrom Cemetery, rural New Rockford, N.D.

Honorary bearers were all of Gerda's family and close friends.

Gerda was born September 1, 1926, in rural Cathay, N.D., the daughter of John and Thekla Gunhilda (Bryne) Gedrose. She was baptized and confirmed at Stavanger Lutheran Church in Wells County. She attended school in Fairville Township, Wells County, until November of 1941.

She then moved with her family near Brantford and attended Columbia Consolidated School, and in 1945 she graduated from New Rockford High School. She later attended Dakota Business College in Fargo for one year.

Gerda worked in Fargo and Devils Lake until she married Donald Keith Backman on November 13, 1954. She was a devoted wife and mother, and loved living on the farm east of New Rockford.

She was an active member of the First Congregational Church. She taught Sunday school and Bible school, helped her children with many 4-H projects, enjoyed the Tiffany Ladies Aid and Homemaker Clubs, and volunteered at the Senior Center. Donald passed away on March 15, 1988.

Gerda was able to take a trip of a lifetime to Norway in 1992. Gerda was always kind and enjoyed helping people. She loved making special meals for her family – buns, lefse, potato sausage, krumkake, and birthday cakes. She will be deeply missed.