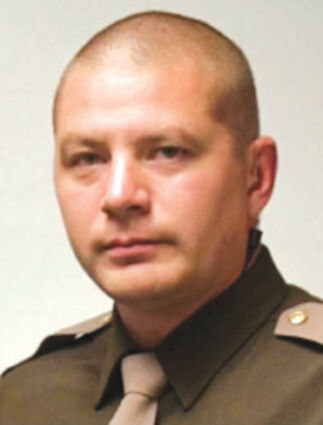 Brandon Arthur Sola was born December 3, 1985, the son of Michael and Shelley (Vasfaret) Sola, in Mayville, N.D. He was raised and educated in Mapleton, N.D., and graduated from West Fargo High School.

After high school, he worked at Stephenson Dry Wall, Fargo, N.D. He took online courses with Ashford University receiving a Master of Arts Degree in organizational management on April 2, 2012.

Brandon enlisted in the United States Air Force on November 6, 2003, and was stationed with the 119th wing of North Dakota Air National Guard, Happy Hooligans in Fargo. He started as a F16 crew chief, and later he worked as a sensor operator with the Predator, which is an unmanned aircraft. At the present time he was a sensor operator with Reaper, which is also an unmanned aircraft.

Brandon started with the North Dakota Highway Patrol in 2014, and was stationed in McHenry County, N.D., for six years. He became Chief of Police of Carrington, N.D., and held that position for the last seven months. He was still Chief of Police at the time of his death.

Brandon was united in marriage to Rebecca A. Carter November 25, 2006, in Harwood, N.D. They made their home in West Fargo, until 2014 when the family moved to Velva.

He attended the Academy of Combat Arts in Fargo where he obtained a Blue Belt in Jiu Jitsu. He also held a black belt in Taekwondo. Brandon also did Muay Thai Boxing as well as regular boxing and wrestled.

He enjoyed hunting, fishing and doing all outdoor activities including riding his Harley. Brandon loved writing poetry to his wife. Brandon was a huge Minnesota Viking fan.

Visitation was Friday, July 8 from 5 to 7 p.m. at Oak Valley Lutheran Church, Velva.

In lieu of flowers, memorials are preferred to the Brandon Sola Memorial Fund at Gate City Bank in Minot. Rebecca set this fund up for their five children.